Hit enter to search or ESC to close
Uncategorised

To find out our earlier news – please visit our Facebook Page

Our latest project, our ninth project since 2005 to be funded by Arts Council England; this time also supported by UNLtd  ; Tang Hall Big Local  and Hull City Council ; was called “Suitcase of Memories & Dreams”. 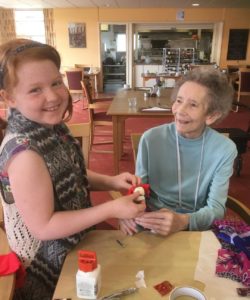 As a pilot project, this was intended to discover best practise for developing future intergenerational puppetry projects. We learnt a great deal, not least in logistics!  We are keen to find out ways to develop our findings in future projects in York and Hull. We firmly believe that all expressive arts are a great tool for intergenerational work – and that this is of immense benefit both to older people (particularly those who are less mobile in care homes) and to children. The capacity for puppets to allow safe expression, (through participants in effect being masked by an alternative identity), is something which we need longer to properly investigate. 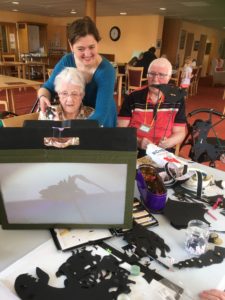 From May to July 2019, Anna Ingleby collaborated with opera singer & intergenerational specialist Thea Jacob (of Songbox ) and community musician Joe Christie to work on three strands of this intergenerational pilot puppetry project. This combined singing, music making and puppetry – resulting in puppet stories captured on video, based on the memories and dreams of the participants. At Red Lodge Retirement Home residents worked with home educating families; Girls from Tang Hall Community Centre Youth club worked in the shared lounge of the sheltered housing in  Glen Lodge flatlets in Tang Hall and at York Travellers Trust / taster sessions were held. 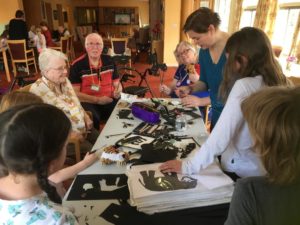 The final strand was a series of intergenerational workshops at Scrapstore’s Creative Hub, which accompanied Indigo Moon Theatre’s Christmas performances of Aladdin and Jungle Book. Special tickets were given to 10 audience members per show, who came as intergenerational pairs (children accompanied by a grandparent or equivalently aged friend or relative). These participants made shadow puppets and filmed a collective story at the end of each workshop… based on characters inspired by memories, who were then made into animals.