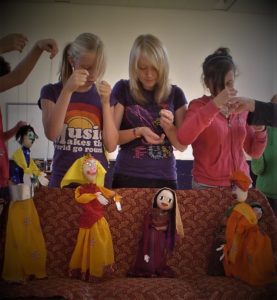 This workshop involves a simple method of making a dancing Indian puppet out of stockings and recycled cloth. Two versions are available, one simple (originally devised by Pat Brennan) and the other more complex (adapted by Anna Ingleby), depending on the age, ability, time and support available. 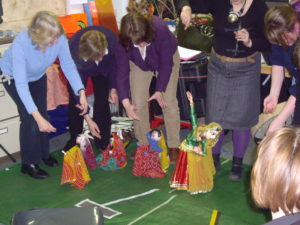 After making the dancing puppets, children can learn how to make them dance with Saraswati and end the session with a simple Bollywood style dance presentation. 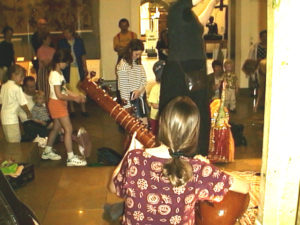 Saraswati, the dancing marionette from Rajasthan, possibly with live sitar and/or other kathputli characters (such as a snake charmer with cobra, a horse rider, a tabla player, a camel, and a puppet which is neither male nor female), can provide a short demonstration that might accompany this workshop. 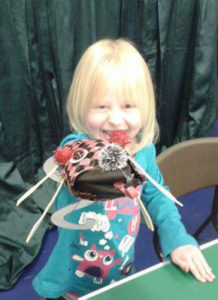 Using another very simple prototype devised by Anna Ingleby for use at a Barbican Centre workshop, very tactile glove puppets with animal bodies and moving mouths can be created in a very short space of time, allowing (in favourable circumstances) some time to work on performing stories. Despite the same very simple making method for all the puppets, the way the creatures are given ears, eyes, tails etc. can result in all of them looking like completely different animals!

These puppets were originally devised by Anna Ingleby as prototypes for workshops at the Barbican centre in August 2001.

The strength of these prototypes is their effective use of materials including the use of weights at the ends of the leg wires creating easily achieved movement. Contrary to popular belief, marionettes can be very effective for childrens’ workshops if the stringing is kept simple enough. In the case of the marionette mice, only one string forms a large loop between two points on the mouse’s body, allowing easy handling, effective movement and low risk of tangling.