A contemporary tale: the eternal quest for love, identity and belonging.

Mermarella - Cinderella of the Sea

Kidnapped from the fresh blue river water to the salty green sea, will Mermarella ever find love again?

There's magic and mayhem in the rainforest!

The Worm that Squirmed

Indonesian rod puppets tell of a squirmy worm who causes chaos wherever he goes. Where is he now?

Workshops For All Ages

Join Alice on her magical adventure as she chases the White rabbit.

What if Shakespeare and Moliѐre were our contemporaries? 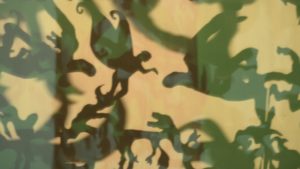 Indigo Moon Theatre – the UK’s leading children’s shadow puppet theatre company – has toured nationally and internationally to theatres, festivals and schools since 2001. Their work combines traditions, techniques and styles from around the world, particularly from Europe and Indonesia.  Their shows often carry important, transferrable messages about the world around us.

Indigo Moon is based in Hull, Buy real viagra online East Yorkshire, at Scrapstore Studios, Hull where they created a studio theatre and workshop space in 2012.

There’s magic and mayhem in the rainforest! Animals’ homes are at risk as bulldozers and diggers crash their way through trees and foliage.

This colourful tale from the Arabian Nights is set in the Middle East: a place of mystery, enchantment and strange, mythical creatures.

Saraswati has delighted audiences in many places both in Britain and abroad since 1992. She dances in traditional Rajasthani folk style, as well as reacting to her audience in her own particular way.

Jungle Book tells a surprisingly good story that harkens back to the poetry & spirit of Rudyard Kipling’s original books.

THE WORM THAT SQUIRMED

A contemporary show for children or adults alike. Indonesian rod puppets tell of a squirmy worm who causes chaos wherever he goes.

Interactive Theatre for young children, where the audience become the legs (and obstacles!) of the pink centipede!